From Zelda Dungeon Wiki
Jump to navigation Jump to search
Want an adless experience? Log in or Create an account.
Shiro 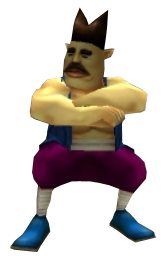 Shiro is one of the Carpenters that appear in Ocarina of Time.

When Link is a child, Shiro can be found within Kakariko Village where he prances around, running between the Windmill and the path that leads to the Kakariko Village Graveyard. If you stop to talk to him, he mentions Dampé and will give Link the time. It is always daytime when you talk to Shiro outside, so Dampé will be asleep in his hut. He suggests that Link head out to Hyrule Field, so time can pass by.[1] At nighttime, Shiro can be found inside one of the homes, where he once again gives you the time and then complains that dinner isn't ready yet.[2]

When Link is an Adult, the Carpenters venture off to Gerudo Valley, where they are captured and held captive in the Gerudo's Fortress. Link finds Shiro locked in a jail cell and after defeating the Gerudo Thief to free him, he will tell Link that you will need the eye of truth in order to cross the Haunted Wasteland and reach the Desert Colossus.[3]

The boss of the Carpenters was hired by Impa to turn Kakariko Village into a true city like that of Hyrule Castle Town.[4]

After saving the Carpenters, they will appear back at a tent in Gerudo Valley. Shiro will tell you that without the old witches, the Gerudo thieves are not that scary afterall.[5]

The name Shiro is a Japanese name that means fourth son.