From Zelda Dungeon Wiki
Jump to navigation Jump to search
Want an adless experience? Log in or Create an account.
Flat 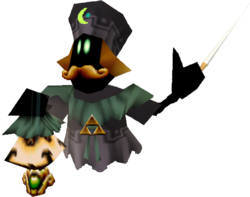 Flat in Ocarina of Time

"I served the Ikana Royal family. I am the composer called Flat. "

Flat is the youngest of the Composer Brothers,[3] with his older brother being Sharp. As reoccurring characters in The Legend of Zelda series, Sharp and Flat appear as musically talented Poes. When they were living, they composed songs for the Royal Family of Hyrule and Ikana Royal Family. 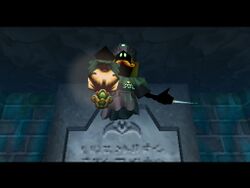 In Majora's Mask, Flat had been locked up beneath Ikana Graveyard by his own brother who had been cursed.[5] When Link frees him, he teaches Link the Song of Storms, which he had composed to help heal Sharp and return him back to normal.[6]