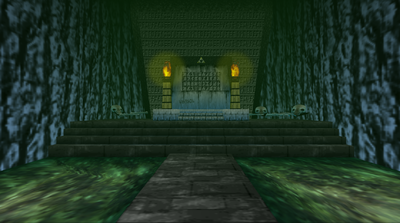 Final area of the tomb
In Other Languages[show][hide]

The Royal Family's Tomb is located at the back of the Graveyard in Kakariko Village. The only true reason to ever visit this area is to learn the Sun's Song.

When Link arrives outside of this large tomb, he can play Zelda's Lullaby. This will activate a small cut scene in which the sky turns cloudy and gray. A bolt of light will fall from the sky and the grave will break open. This will cause a hole to open in the ground, indicating there is something down below.

Down there he will find some Keese. Defeat them to open the nearby door. There are also two torches which can be lit with Din's Fire or Fire Arrows, which will release a small chest.

In the next room, there is a small congregation of three ReDeads, but they can easily be avoided. There is also a strange green liquid emitting from the ground that can harm Link.

Once Link gets to the next room, there is a headstone, which he can read to learn the Sun's Song. This song allows Link to change night into day and vice versa. This is very helpful, especially in Hyrule Field when the Stalchildren come out at night, and when trying to enter Hyrule Castle Town. It can also be used to stun ReDeads for a brief moment; this will help Link to exit the tomb more easily.