From Zelda Dungeon Wiki
Jump to navigation Jump to search
Want an adless experience? Log in or Create an account.
Beneath the Graveyard 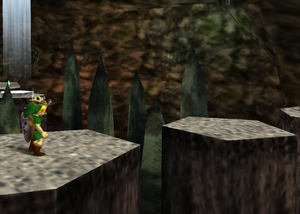 Central area Beneath the Graveyard

Beneath the Graveyard is a location in Majora's Mask. It is situated beneath Ikana Graveyard in the region of Ikana. The entrance to the depths is located within one of the graves, which are guarded by the Stalchildren. Depending on the day, the Stalchildren patrol different graves, and each grave leads to a new section.

Link can enter the depths of graveyard through three different entrances. Each entrance is capable of being opened on a specific night in the cycle of the three days. To uncover one of the entrances, Link needs to first obtain the Captain's Hat off Captain Keeta. The Mask is vital as it allows the young hero to command the Stalchildren to diminish the gravestones that cover the entrances.

On the night of the first day, Link can don the Captain's Hat and speak to the Stalchildren that are patrolling a specific grave. Link then orders the Stalchildren to open the grave, while in the process the undead beings sink in to the ground. This allows Link access beneath the grave, where he encounters a small puzzle in which he must light three torches. This allows the young hero access to the next room, where he faces off against an Iron Knuckle. After doing so, Link meets one of the Poe conductors, Flat, who was sealed here by his cursed brother Sharp. Link can then learn the Song of Storms, which is engraved on the Stone tablet.

On the night of the second day, the young hero must once again order the Stalchildren to open the grave they are patrolling. Doing so leads Link to another area beneath the grave. Here Link must utilise the Lens of Truth to spot hidden doors and paths. Once again, Link encounters an Iron Knuckle within the depths of the underground. Defeating the Mini-Boss summons a Treasure Chest, which contains a Piece of Heart.

On the third and final night, the grave once again leads to a new section underground. This time, Link encounters the timid gravekeeper, Dampé. Dampé appears to be looking for treasure, but his lantern ran out, meaning he cannot navigate his way through the underground. Link must use the light of Tatl to guide the creepy gravekeeper to specific Soft Soil spots. After Dampé uncovers three mysterious flames, a Big Poe appears. Defeating the Poe causes a Treasure Chest to appear, within the chest lies a Empty Bottle.