From Zelda Dungeon Wiki
Jump to navigation Jump to search
Want an adless experience? Log in or Create an account.
Ikana Graveyard 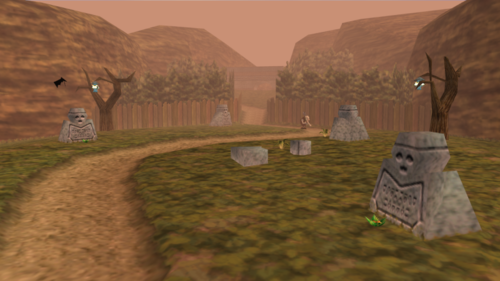 Ikana Graveyard is a location that appears in Majora's Mask.[1] It is situated within the final region of the game, Ikana. More specifically it is located on the left as Link enters the region. The graveyard itself is the resting place of the once thriving civilization of Ikana Kingdom.[2] The area is largely deserted and during the day the creepy grave keeper Dampé wanders round while at night the undead Stalchildren rise form the graves.

During the day, Dampé watches over the graveyard, patrolling the graves back and forth, apparently doing nothing at all.[3] However, if Link wears the Captain's Hat, he sees him as a ghost and runs away. Also, Link can delve deeper into the graveyard to find Captain Keeta. Link must play the Sonata of Awakening in order to awaken and challenge Captain Keeta. Captain Keeta retreats down a predetermined path, placing firewalls behind him in attempt to keep Link from catching up to him. Link must defeat the Stalchildren in order to lower the firewalls and catch Captain Keeta. If Link fails to catch up to Captain Keeta before he reaches the end of the path, the captain assumes that Link doesn't have the strength required and Link must try again on a different day.[4] However, if Link catches Captain Keeta and defeats him, he is granted the Captain's Hat, as the flames surrounding the Treasure Chest clear.[5]