From Zelda Dungeon Wiki
Jump to navigation Jump to search
Want an adless experience? Log in or Create an account.
Mountain Village 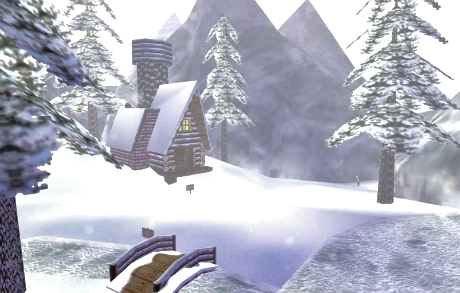 When Link first enters this location he is greeted by the harsh winter conditions and the effects it has had on the land and on the Gorons. [1] Upon first entering the Village Link can strike the Owl Statue to open up a warp point. First Link heads to the west, on to the Twin Islands, in which leads up to the Goron Village. After unveiling Darmani's spirit, Link must follow him back to the Mountain Village, whete he leads Link to a cliff. Link equips the Lens of Truth to uncover a hidden ladder leading him to the Goron Graveyard, where he obtains the Goron Mask.[2]