From Zelda Dungeon Wiki
Jump to navigation Jump to search
Want an adless experience? Log in or Create an account.
Waterfall Rapids 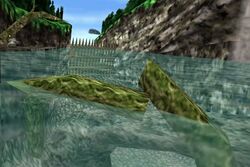 Waterfall Rapids, also known as the Fall Headwaters,[1] is a location in the Great Bay region of Termina in Majora's Mask. It is nestled off to the west side of Great Bay Coast.[2] The journey to the Waterfall Rapids involves Link having to utilize the Hookshot to ascend on to the palm trees on the many platforms that lead to the summit of the waterfall.[3] This is also the main location in which the Beaver Brothers reside,[1] where they run a series of Mini-Games.

At the top of the Waterfall Rapids, Link can play a game with the Beaver Brothers in order to obtain an Empty Bottle.[4] Wearing the Zora Mask, Link must race through rings in an allotted time and meet or exceed the requirements.[5] If Link does not go through one of the rings, the subsequent rings he swims through will not count.[6] On first completion, the older brother refuses to give Link his reward and claims that he must race him before rewarding the young hero.[7] The rules change slightly when Link races the older brother, as now there are 25 rings that Link must swim through.[8] When Link has beaten the second challenge, he is gifted with an Empty Bottle.

Once Link has won the second race, he can further challenge the brothers, who now have no more Empty Bottles to give.[9] These two challenges are slightly harder than the first as the time given is ten seconds shorter.[10] Once Link has beaten the new time limit twice, he is rewarded with a Piece of Heart as a gesture to leave the Beavers alone.[11][12]