From Zelda Dungeon Wiki
Jump to navigation Jump to search
Want an adless experience? Log in or Create an account.
Deku King's Chamber 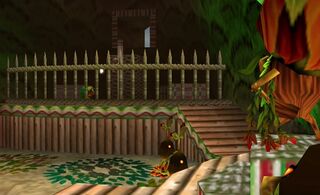 The Deku King's Chamber is a location that appears in Majora's Mask. It is situated in the Woodfall region of Termina, within the grounds of the Deku Palace. This is the home of the Deku King and the rest of the Deku Royal Family.

Link first encounters this area after being greeted by a Monkey, who tells of his friend being held captive in the chamber.[1] To access the Palace, Link puts on the Deku Mask, in an act of disguise. Upon entering the chamber, he learns from the Deku King that his daughter, the Deku Princess, has went missing. The Monkey, who is being held captive, is falsely accused of this crime and is set for punishment.[2][3] When Link leaves the chamber, the Monkey outside tells Link that he must acquire a Magic Bean to infiltrate the palace.[4] Link in Deku form must traverse from platform to platform as well as sneak past the Deku Palace Guards.

The young hero eventually reaches the cage where the Monkey is being held captive. He tells Link that the Princess and himself went to the Woodfall Temple to find out why the waters have turned poisonous.[5] However, he mentions that she had been captured in the temple and tasks Link to save her and so that he can be set free.[6] The Monkey also teaches Link the Sonata of Awakening, which is vital to summoning the Woodfall Temple.[7] After Link rids the evil within the temple, he is able to save the Princess and safely return her to the Deku King.[8] The Princess is angered with her father and demands for the release of her friend, the Monkey. To reward Link, the Princess tells the hero of a treasure hidden within the Deku Shrine.[9]