From Zelda Dungeon Wiki
Jump to navigation Jump to search
Want an adless experience? Log in or Create an account.
Deku Palace Guard 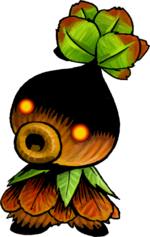 The Deku Palace Guard is an enemy encountered in Majora's Mask. These type of enemies are members of the Deku Scrub tribe. Their main role is to act as guards, to protect the royal family. They are primarily situated in and around the grounds of the Deku Palace, which lies in the Woodfall region of Termina. They appear to be quite small in comparison to their counterparts but have the ability to walk, unlike most of the tribe. The guards don't essentially pose a threat to Link but simply throw him out of the grounds if the hero is caught.

Link first encounters this enemy while entering the vicinity of the Deku Palace area. Before entering the inner grounds, Link encounters a group of Monkeys who explain that their friend has been imprisoned inside the Deku King's Chamber.[1] However, the Deku Palace Guards stop the young hero in his path. Link is only able to enter when donning the Deku Mask, as anyone outside the race aren't permitted to enter.[2] However it also seems that normal Deku Scrubs aren't allowed access either as Deku Link is only able to enter at the punishment of the imprisoned Monkey.[3]

Once Link has entered the chamber, he hears the Deku King's desires to punish the Monkey.[4] However the Monkey explains to Link that he is falsely accused of kidnapping the Deku Princess and she was, instead, captured by a monster. [5] After exiting the chamber, Link is once again greeted by another Monkey, who tells Link that he must obtain a Magic Bean in order to gain access to the prison, where the Monkey is being held captive.[6] The young hero must then navigate the palace garden and avoid the palace guards. If Link is caught he is thrown out and returned to the entrance.