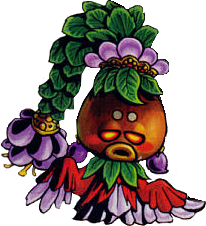 The Deku Princess is a female character featured within The Legend of Zelda: Majora's Mask.

The Deku Princess has two outstanding characteristics about her. The first, she falls into the only female Deku character ever depicted. The second, she can fit into a Bottle. The Deku Princess is the intelligent daughter of the king who is able to control the kingdom much better than her father.

The Deku Princess' disappearance is the reason for much of the conflict in the Southern Swamp. Before the three day cycle begins, the Deku Princess was captured near Woodfall Temple. Her father, the Deku King, hastily blames a Monkey, and arrests and prepares to punish him. After three of the monkey's friends pay Link a visit after healing Koume, it becomes Link's tasks to free the captured monkey from the clutches of the Deku King. Link can do this by infiltrating the Deku Palace, and infiltrating the Monkey's prison cell. The monkey then tells Link that the Deku Princess was captured when she was investigating Woodfall Temple. He will then give Link the Sonata of Awakening to give Link access to the temple, with the mission of rescuing the Deku Princess.

After Link defeats Odolwa, the boss room warp will appear, and lead him to a previously-inaccessible room on the second floor. Directly behind Link, something will rustle, and in a cut scene he will turn around. If Link cuts the grass curtain off of the doorway, he will enter to find...the Deku Princess! The Deku Princess is relieved that she is saved, and asks about her monkey friend. When she finds out that her friend is about to receive capital punshiment from her own dad, she grows and furious, and asks Link to take her home right away. At first, it would seem if Link doesn't have any sort of way to transport a princess back to her palace. But, as it turns out, the Deku Princess can fit (snugly) into Link's bottle. The Deku Princess will insist that you hurry before she is crushed by the small frame of the inner bottle.

Once Link returns to the Deku Palace, the Deku Princess will tell Link to let her out. When Link lets her loose, she appears unharmed, and the Deku King is ecstatic to see his daughter unharmed. But the feelings are not mutual. The first thing the Deku Princess does after her release is attack her father, jumping up and down on his midsection. She demands the guards to release the monkey immediately, as well. For the trouble, Link will be given an opportunity to obtain the Mask of Scents down to the right of Deku Palace.