From Zelda Dungeon Wiki
Jump to navigation Jump to search
Want an adless experience? Log in or Create an account.
Future World 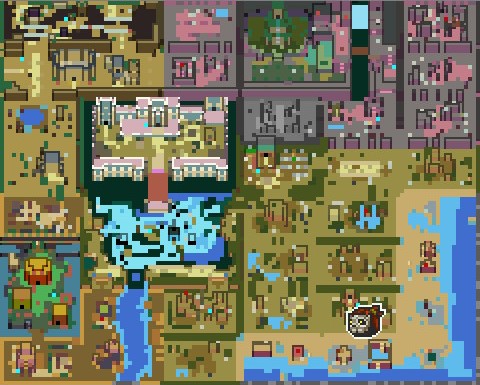 A sample Future World map from Symphony of the Mask

Future World is the final dungeon in Cadence of Hyrule. The dungeon is composed of five floors, each with a golden chest containing a legendary weapon and a randomly selected miniboss. There is also a chance of a Evil Great Fairy spawning who tries to trick the player into a monster trap by saying that a red potion is in the room behind her. Shopkeepers can spawn, but it is not guaranteed.

After making it through the Future World maze, the heroes find themselves in the ruins of Hyrule Castle. Inside is the final boss, Ganon (unless the protagonist is Octavo, in which case he will encounter his future self, The NecroDancer, who informs him that he already defeated Ganon and took his place. Octavo declares that his future self is just like Ganon and decides to destroy him anyway).

After safely navigating the treacherous maze, the player will arrive at Future Hyrule Castle, the home of Ganon and the strongest and trickiest Legendary Weapon: Eli's Greatshovel. Head to the far left side of the courtyard and enter the tower. Freeze the water and push one of the blocks in the top left corner of the room over the ice. Hop on the block and climb up to reach the chest containing Eli's Greatshovel, which can hit three enemies at once and deals more damage if used after digging!

If the player is playing in Single Character Mode as a character other than Cadence, Eli's Greatshovel will be replaced with a Purple Rupee since only Cadence can wield it.

Ganon will start by imprisoning the inactive characters. Attack their crystals to free them before attacking Ganon. The other characters will move as the active character moves (very reminiscent of Minish Cap). After taking enough damage, he will repeat his first move and imprison the inactive characters again. Repeat the cycle until Ganon jumps back onto his perch. Three Triforce marks will then appear on the ground. Have each character stand on them to finally defeat Ganon.

Symphony of the Mask

Ganon will start the battle by stealing the Skull Kid from Skull Kid and putting it on himself. After a few beats, Ganon will try to jump on Skull Kid. Avoid the attack and attack Ganon until the Skull Mask breaks off, then hit him again to take a heart of damage off his health. Repeat this process four more times, after which Ganon will heal back to full health. The next phase is much like the first, except now minibosses will spawn from the corners of the room. Repeat the strategy from phase one until Ganon runs out of health again. To finish him off, have Skull Kid stand on each Triforce emblem for many beats until the emblem is fully illuminated. Once the last emblem is charged, Ganon will be vanquished.