From Zelda Dungeon Wiki
Jump to navigation Jump to search
Want an adless experience? Log in or Create an account.
Evil Great Fairy 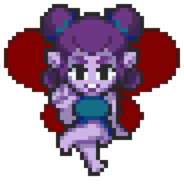 The Evil Great Fairy is a character in Cadence of Hyrule.

The Evil Great Fairy was once a Great Fairy, but Ganon's rise to power twisted her into the opposite of what a Fairy is supposed to be. When talked to, she will greet the player the same way Great Fairies did in present Hyrule[1]. If the player talks to her again, she echoes the request to be healed,[2] then states that Ganon sealed her magic, but says that there is a potion in the chamber behind her.[3] Entering the room springs a monster trap in which the player must defeat all the enemies to leave. When spoken to again, the fairy laughs at the player for being gullible enough to enter the room,[4] but acknowledges that the player is too strong to be defeated by the monsters.[5] She finishes by telling the player to wait until he or she gets to Ganon.[6] The Evil Great Fairy also does weapon infusion at the normal price.