From Zelda Dungeon Wiki
Jump to navigation Jump to search
Want an adless experience? Log in or Create an account.
Yves 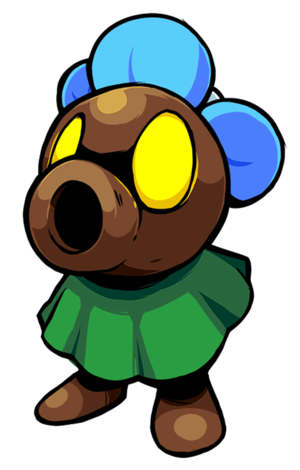 Yves is a character in Cadence of Hyrule. He is a Deku Scrub who becomes playable after collecting enough Deku Seeds for Tingle.

Yves can first be met in the Lost Woods inside of a hollow tree trunk next to Tingle. He tells the player that he has always wanted to be an adventurer, but because he cannot hold a sword, he can only dream.[1] After collecting 20 Deku Seeds (an additional 10 after the first 10), the player can offer them to Tingle, who eats them excitedly.[2] As thanks, he will offer the player to take Yves along with them.[3] Yves will then become a playable character that can be selected at a Sheikah Stone.[4]

Unlike Link, Zelda, and Cadence, Yves cannot use most items, including any weapons.[5] He can, however, use bombs, bombchus, various scrolls and bottles, and items with limited durability like boots and shovels. He can attack by either hitting enemies normally or shooting Deku Seeds with L. His R ability lets him burrow into the ground, becoming entirely immune to damage.[6] He also only has one heart and therefore can die very easily.