From Zelda Dungeon Wiki
Jump to navigation Jump to search
Want an adless experience? Log in or Create an account.
Madame Aroma 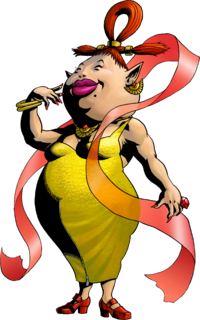 Madame Aroma is a character in Majora's Mask. She can be found inside the Mayor's Residence, home to her husband, Mayor Dotour. During the night of the Final Day, she can be found in the Milk Bar. Aside from being a married woman, she is also a mother to a young man by the name of Kafei, who is engaged to a young woman named Anju. She has her own office right beside her husband's office and handles the appointments of the carnival performances.

Madame Aroma is working as the Postmaster and is part of the Clock Town Carnival Executive Committee. In cooperation with Toto, the manager of The Indigo-Go's, and Gorman, leader of the Gorman Troupe, she is managing their performances during the Carnival of Time.

Since her son, Kafei, went missing about a month ago before the Carnival of Time, she hired an expert person-finder. When Link visits her between 10:00 a.m. and 08:00 p.m. on the First or Second Day, she believes that Link is this person, and if he agrees to search for her son, she awards him with Kafei's Mask, a mask she made herself. Using this mask, Link is able to ask people for information about Kafei. In the process of solving this quest, Kafei gives a Letter to Mama to his friend, the Man from Curiosity Shop. After receiving the letter from the shopkeeper on the Final Day, Link can deliver it in two different ways. His first option is to deliver it directly. In order to do this, Link has to visit Madame Aroma in the Milk Bar during the night of the Final Day. When given the letter, she is very happy to hear that her son is all right and gives Link a new Bottle filled with Chateau Romani. Alternatively, Link has the option to give the letter to the Postman during the night of the Final Day. The Postman has a really hard time because he is afraid of the falling Moon and wants to flee from the town, but that is not written on his delivery schedule, which has almost the highest priority in his life. The only thing higher in priority are express letters. When he receives the letter to Madame Aroma from Link, he does his job and delivers it to Madame Aroma in the Milk Bar. Madame Aroma is surprised to see him and asks him why he has not left the town yet. The Postman answers that he wants to guarantee the post delivery on the next day. Being the postmaster, Madame Aroma relieves the Postman from his duties and allows him to flee. The Postman gives Link his old hat, the Postman's Hat, and joyfully leaves the town. In this alternative, Link does not yield any reward from Madame Aroma. If Link talks to her, she still asks after her son.