From Zelda Dungeon Wiki
Jump to navigation Jump to search
Want an adless experience? Log in or Create an account.
Don Gero 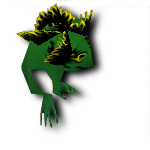 Don Gero is a character from Majora's Mask who never appears in the game, but is only referenced. He is the legendary conductor of the Frog Choir and is heavily respected by its members. The Choir waits for him and jumps on his command to perform. None of the Frog Choir members have seen Don Gero for a long time, however. What happened to him is unknown.

A hungry Goron gives Link the Don Gero's Mask in exchange for Rock Sirloin. This Goron can be found in the Mountain Village on a ledge, shivering from the cold and wearing Don Gero's Mask. Somehow he got himself stuck on a ledge where the waterfall is frozen, and is freezing to death from the cold. Starving, he says he wants to eat one more time before he dies, something tough and hard to chew. When Link brings him the Rock Sirloin and throws it up on the cliff, he happily devours it. In gratitude, he gives Link Don Gero's Mask, telling him if he wears it no one would think twice if he were to direct the Frog Choir. His fate is uncertain, as he was certain he would freeze to death and yet Link frees the mountain from an abnormal Winter and restores Spring after finding him and he isn't seen anywhere afterwards. The mask is said to look exactly like Don Gero, which Link uses to convince the Frog Choir to come back to a thawed Mountain Village to perform. But since Don Gero never appears, not much is known about him. He may be a very large frog, as one of the Frog Choir members says to Link as he wears the masks and believes he is Don Gero that he has "lost a little weight". The Goron is often confused with Don Gero himself, but Don Gero is in fact another one of the unseen characters in Termina.