From Zelda Dungeon Wiki
Jump to navigation Jump to search
Want an adless experience? Log in or Create an account.
Old Lady from Bomb Shop 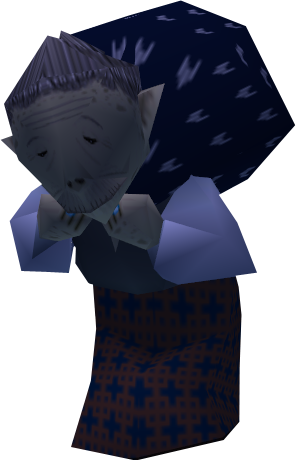 The Old Lady from Bomb Shop is an unnamed character from Majora's Mask. She helps run the Bomb Shop with her son, the Bomb Shop Owner, in West Clock Town. She is of similar height to Link and is depicted as a frail and elderly woman who shakes as she stands much like other elderly characters of the game. She is also one of the twenty characters who have an entry in the Bombers' Notebook. However, she can only ever be seen outside the Bomb Shop at 12am on the First Day. She is also believed to be a firm believer of the Four Giants being the guardian deities of Termina.

The part that the Old Lady plays in the Bombers' Notebook is quite simple and abrupt in the sense that it can be completed in a matter of seconds. The Old Lady arrives in North Clock Town at precisely 12am on the First Day and carries a large blue bag that is nearly as big as her. As she approaches the area occupied by the Postbox, the prancing thief Sakon then knocks her down and attempts to make off with her Bomb Bag leaving her stunned on the floor and screaming at the culprit. One swing from Link's sword is enough to knock the bag out of Sakon's hands. He then begins to prance towards the gate and disappears into the gloom. Once Link has completed this task, the Old Lady takes back her Bomb Bag and thanks Link for his efforts by rewarding him with the Blast Mask. She then disappears off to the Bomb Shop and thanks Link and says that since Sakon didn't make off with her Bomb Bags, she is able to finally stock Bomb Bags at the Bomb Shop.[1] This indicates that Link is now able to re-stock.

The Blast Mask acts as a substitute Bomb, which can be handy when Bombs are scarce. However, as the mask is strapped to Link's face, it causes him damage, unless Link uses his shield while blasting the mask. Also, the day after saving the Old Lady from Sakon, Link is able to purchase an efficient up-grade to his Bomb carrying capabilities by purchasing the Big Bomb Bag allowing Link to carry up to 30 Bombs at any one time. If Link now talks to the Old Lady, she says that a nice fella helped her out so that they are able to finally sell Big Bomb Bags and that the Four Giants are looking out for her.[2] This proves that the Old Lady is in fact a believer of the Four Giants and hails the help that she received back to them, although forgetting that it was in fact the person she is talking to that saved her.

However, if Link allows Sakon to escape, the Old Lady will be bitterly disappointed and once begin walking back to the Bomb Shop. If this occurs, it goes down as a failure in the Bombers' Notebook and Link will not be rewarded with the Blast Mask. The next day, she'll express her disappointment in not being able to sell the Big Bomb Bag which was cruelly taken from her. She'll also announce her shock at such a seemingly innocent person turning out to be so deceitful.

Alternatively, if Link attacks Sakon with a projectile such as an Arrow or the Hookshot, the Bag of Bombs explodes viciously. It also leads to Sakon's demise as he immediately disappears from Clock Town and is no longer viewable dancing in Ikana Canyon for the remaining three days. The aftermath to this scenario concerning the Old Lady and the Big Bomb Bag remains the same as if he had stolen it from her.

Her body and clothes heavily resemble that of the Old Lady from Hyrule Market Town during Link's childhood in Ocarina of Time.