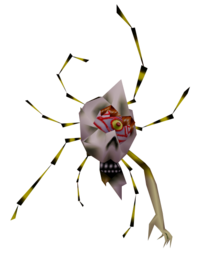 A man who is found at the Swamp Spider House located in Woodfall and has been cursed by the house's inhabitants, the Gold Skulltulas, due to his greed. Sometime before he entered the building, he encountered a strange person who gave him the Mask of Truth and told him that with this item he could find a great treasure inside the house that Link found him in. He left with his dog to go search for the treasure, but upon entering the house, he found himself cursed and became a Skulltula due to his greed. The only way to lift the curse is to kill the thirty Gold Skulltulas that roamed deep inside. The man could not bring himself to do this due to the curse.

When Link came along, and entered the house, the man pleaded for the young hero to help him reverse the curse upon himself. Link complied with the man's request and ventured further into the house and diligently searched for the Gold Skulltulas that laid inside. Upon vanquishing all thirty of them, the curse dissipated and transformed the man back into his true form. When Link returned from his victory over the spiders, the man rewarded Link for his efforts by giving him the Mask of Truth that the mysterious man gave him. Link could use this mask to see into the thoughts of animals and the Gossip Stones that are found scattered across Termina. When using the mask on the man's dog, Link finds out that the man's eyes are always filled with greed.