From Zelda Dungeon Wiki
Jump to navigation Jump to search
Want an adless experience? Log in or Create an account.
Lulu 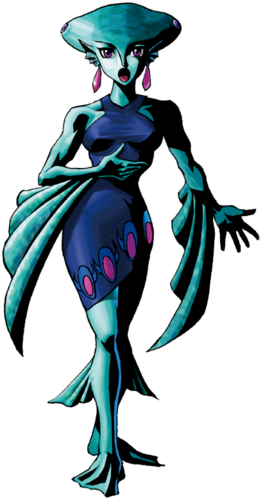 Lulu is a character in Majora's Mask. She is the current singer of the popular Zora band, The Indigo-Go's. She plays a major role in the game because Link has to recover her eggs in order to enter the Great Bay Temple. Lulu is the Terminian counterpart of Princess Ruto from Ocarina of Time.

Prior to the events in the game, Lulu gave birth to seven Zora Eggs shortly after the waters around the Great Bay became warm and murky. Lulu mysteriously lost her voice because of this and could not speak or sing. She asked the band leader Evan for help because she did not want her boyfriend Mikau to find about this. Evan told her to bring her eggs to the Marine Research Lab in the controlled water. Shortly after this, the Gerudo Pirates invaded the lab and stole all of the eggs after being tricked by the Skull Kid into thinking that the eggs had clues about the mysterious events that were happening. The next day, Lulu told Mikau what happened. He wanted to recover her eggs and went out to find them. However, he is mortally wounded and barely alive when he comes to shallow waters after Link finds him. Link helps him out of the water, but it is too late. Link plays the Song of Healing to relieve Mikau of his pain and let him pass on, sealing his spirit in the process within a mask called the Zora Mask.

With this mask, Link is able to switch between Zora and Hylian in order to be able to save Lulu's seven eggs. To do that, Link has to travel deep within the Pinnacle Rock and into the Pirates' Fortress itself. After Link recovers all seven eggs and puts them back in the laboratory, the eggs hatch. The newly hatched Zoras position themselves so that they form notes. Link quickly learns the song of New Wave Bossa Nova. This song eventually lets Lulu recover her voice and awakes the Giant Turtle, who transports Link to the Great Bay Temple.