From Zelda Dungeon Wiki
Jump to navigation Jump to search
Want an adless experience? Log in or Create an account.
Terminian 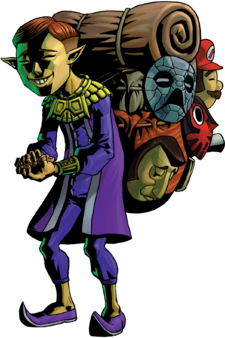 The Terminians are the main nationality of people hailing from Termina in Majora's Mask. The Terminians are the Termina counterparts of the Hylians of Hyrule. Some of the Termina counterparts play a different role than they did Hyrule sometimes contrasting their role in Ocarina of Time. This change can also be present in the motives and general personality of the Terminian. The attitude of the people from Termina normally differs from one to another but typically they have a good mood. Recently, the Terminians have been plagued of many calamities due to the work of Skull Kid and the powers of Majora's Mask. The result of this is an impending apocalypse via the falling of the Moon.

However, the Terminians themselves seem to be more advanced than their Hyrulean counterparts. This is shown through the technology of Pictographs and the ability to have created rockets, used in the ceremony, Carnival of Time.

The term "Terminian" mainly comes from the alternate land to Hyrule, Termina. The word "Termina" itself comes from the English word "Terminal". But it actually relates to an actual terminal such as a bus station, because Eiji Aonuma, producer of The Legend of Zelda series, says that "people come and go in Termina"[citation needed].

The Terminians who live in Clock Town are governed by a mayor. They worship the Four Giants who have created Termina and still guard it. Another possible form of worship could be the Goddess of Time only briefly mentioned in the game itself when aiding Link.