From Zelda Dungeon Wiki
Jump to navigation Jump to search
Want an adless experience? Log in or Create an account.
Mayor Dotour 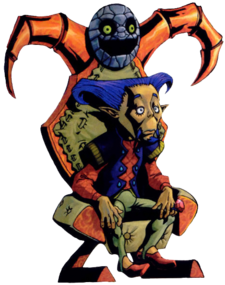 Mayor Dotour is a character in Majora's Mask. He is the mayor of Clock Town.

Mayor Dotour resides in the Mayor's Residence with his wife, Madame Aroma, in East Clock Town. During most of the three days Link spends in Termina, the Mayor is in a meeting to decide what to do about the descending Moon. Captain Viscen, Captain of the Clock Town Guard, is for evacuating the citizens to nearby settlements such as Romani Ranch. Meanwhile, Mutoh the Carpenter is for continuing with the Carnival of Time, as he has worked tirelessly to prepare for it.

The Mayor does this until 6:00 PM on the Final Day, at which point, Mutoh demands that the Mayor make a decision, otherwise he'll call in his wife (who is on the Carnival planning committee) to make the decision for him. At which point, he decides to continue with the Carnival. After the members of the meeting leave, he spends the remaining time pondering on whether or not he made the right decision. This can be stopped, if Link interrupts the meeting while wearing the Couple's Mask, reminding the participants of their families. The Mayor then makes the decision for everyone to go to their families and decide whether or not to evacuate themselves. He then rewards Link with a Piece of Heart.

His son, Kafei has recently gone missing. Kafei is set to be married to Anju the day of the Carnival of Time.