From Zelda Dungeon Wiki
Jump to navigation Jump to search
Want an adless experience? Log in or Create an account.
Anju's Mother 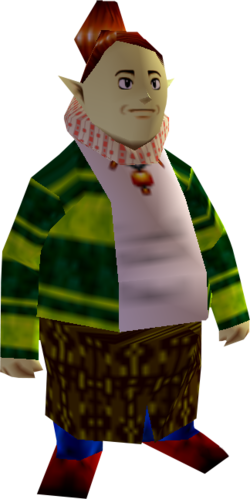 Anju's Mother is a character in Majora's Mask.

The mother to the Stock Pot Inn Innkeeper, Anju, and daughter-in-law to Anju's Grandmother. She is middle-aged and has a rounded appearance. She is protective of her daughter and hates that her daughter's fiancé, Kafei, has left without saying a word to Anju. This is evident in how she responds to Link wearing Kafei's Mask when speaking to her. She will become visibly angry and raise a fist at Link, telling him to not speak to her with "that unpleasant mask" on.[1] She believes that the reason behind his disappearance is because he has run off with Cremia who notably has a crush on the blue-haired man and as Anju's Mother surmises that she will need financial support for running the ranch through Kafei's mother, Madame Aroma.[2] Another reason behind her anger towards Kafei's disappearance maybe be due to her own husband disappearance. She believed that he would return and waited for him, but found that he wasn't coming back.[3] She believes that because of this she passed down her naivety to her daughter.[4]

Anju's Mother doesn't appear very often in the game. In the instances when she does appear it is usually on the Second Day standing at the desk at Stock Pot Inn (if Anju didn't meet Link with Kafei's mask during the afternoon of the First Day). She also appears in a secret cutscene which is accessible during a certain point in time in which she discusses Kafei's disappearance with Anju.[5] Later on, she, her mother-in-law, and Anju (depending on whether or not she received the Pendant of Memories) seek shelter at Romani Ranch on the night of the Final Day.[6] Her last appearance is after Link stops the moon from falling and defeats Majora's Mask. She is seen standing along with the others who are attending Kafei's and Anju's wedding. It is unknown if she still harbors the same anger towards her new son-in-law or if she has forgiven him for leaving his daughter for a long amount of time.