This article is about the Goron named Link in Majora's Mask. For Link's form after using the Goron Mask, see Goron Link. 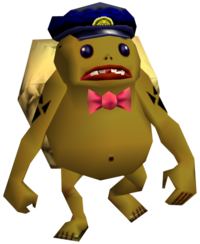 Link the Goron is a Goron that appears in Majora's Mask. He always shares the name of the player.

Link is a Goron who coincidentally has the same name as Link.

If Link goes to the Stock Pot Inn before Link the Goron does, he can steal his hotel reservation. By telling Anju his name, he is given a Room Key to the Knife Chamber. This leads to some frustration on Link the Goron's part, who ends up sleeping outside the hotel.[1]

Link the Goron often ends his sentences with -goro, which leads to confusion.