From Zelda Dungeon Wiki
Jump to navigation Jump to search
Want an adless experience? Log in or Create an account.
Tael 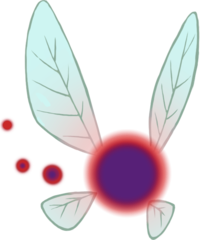 Tael is the Skull Kid's companion, as well as Tatl's brother. His dark purple color is very uncommon for a Fairy. He is only seen during several cut scenes in Majora's Mask.

Tael, chronologically, is first seen in a scene depicting him and his elder sister, Tatl, hiding beneath a log in Termina Field due to rain. The two then discover a lone Skull Kid, who is incidentally also hiding, but for an entirely different reason - loneliness. After a while, the two fairies begin to comfort the lonely creature, eventually becoming close friends with him.

Some time passes, and the three happen upon a wandering Mask Salesman. For whatever reason, Skull Kid plays a huge prank on the Salesman with Tael and Tatl playing along, stealing the legendary Majora's Mask in the process. The Skull Kid dons the Mask and gains power he never had before. At this point, Tael and Tatl simply play along with Skull Kid, though Tatl begins to doubt the reasoning behind the Skull Kid's actions.

More time passes, and the three discover an oddity: Link and Epona wandering throughout the Lost Woods. Link is attacked by the Skull Kid, who then makes off with his Ocarina. Tael and Tatl stick with the Skull Kid. Eventually, Link finds the Skull Kid, Tatl and Tael in a dreary, dark area. There, the Skull Kid successfully transforms Link into a Deku reflection of himself. Retreating with a kiddish laughter, the Skull Kid mocks Link who looks like a fool more than anything else, with Tael following the Skull Kid. Tatl stays behind to mock Link, and gets separated from Tael.

Even more time passes, with Link and Tatl finally confronting the Skull Kid on his actions. Tael makes a brief but important appearance here: he tells Link and Tatl to awaken the Four Giants.

At the game climax, Link and Tatl confront the Skull Kid one last time, Tatl and Tael reunite, and it is revealed that the true evildoer behind all the harmful actions dished out to the denizens of Termina was in fact Majora's Mask itself. Tael has pity for the Skull Kid, stating that it wasn't his fault for being possessed by the mask.

At the credits, Tael is seen together with Tatl and the Skull Kid in Termina Field. Tael comforts his sister about Link's departure.