From Zelda Dungeon Wiki
Jump to navigation Jump to search
Want an adless experience? Log in or Create an account.
Gorman Brothers 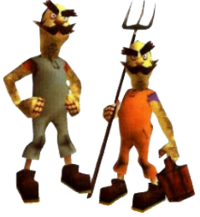 The Gorman Brothers are characters in Majora's Mask. They are two scoundrels who own the Gorman Track on Milk Road. The two are foul horse trainers that discriminate against the Deku and Hylian races, while fearing the Goron and Zora races. The brothers sell Milk and claim that it is superior to the produce of Romani Ranch.

Along with the character known simply as Gorman, the Gorman Brothers function as Termina's counterpart of Ingo from Ocarina of Time.

The "Gorman Brothers" are actually two of three brothers — the middle brother is the Gorman Troupe leader, Gorman. They own and operate the Gorman Track on Milk Road. They are malicious, dishonest, and criminal, unlike their brother. According to a depressed Gorman, he is the "despised second son"[1]. He also claimed that his older brother was better at handling horses[2], and his younger brother better at caring for them[3].

When Link talks to the Gorman Brothers while wearing the Troupe Leader's Mask he gets from Gorman, they become sad and get sentimental over their middle brother, realising that he's gone into show business and is having a tough time. They then beg Link to take the mask off, saying they can't get sappy about that kind of stuff.

The main target of their criminality is Romani Ranch, who they steal from and spread lies about in an attempt to ruin to get a monopoly on the milk business. Misogynistically mocking Cremia as "some young girl", they suggest to Link that he steals a horse from the Ranch, claiming she wouldn't even notice.[4] They also falsely claim Romani Ranch waters down their milk[5].

If Link has already aided Romani in defending Romani Ranch against strange aliens known as "Them" on the First Day, Link will be able to aid Cremia on her milk run in the Night of the Second Day. She will attempt to transport bottles of milk to Clock Town, but the main path back to Termina Field is blocked off by a fence. This forces the two to instead ride through the territory of the Gorman Brothers who, wearing masks on their faces, chase Link and Cremia and attempt to break the milk bottles carried in Cremia's cart.

The Bow must be used to derail the two attackers and, if Link is successful, Cremia will reward him with Romani's Mask.

In Majora's Mask 3D, an additional sidequest with Gorman is added. Wearing the Troupe Leader's Mask, speak to Gorman on the second floor of the Stock Pot Inn on the morning of the Second Day. He will request that Link bring him some Mystery Milk that afternoon. To get it, Link must speak to the Gorman Brothers at the Gorman Track while, again, wearing the Troupe Leader's Mask. They will give him the Mystery Milk, but warn that it spoils within two minutes. Bringing it to Gorman within the time (without using the Song of Soaring) and before 6pm will cure his upset stomach, and Link can keep the bottle for his trouble.