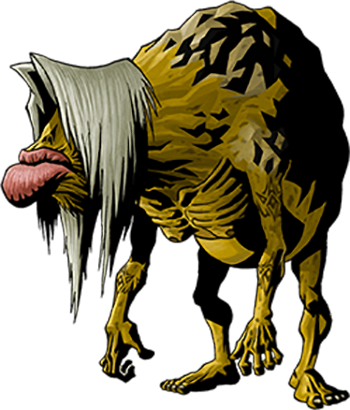 The Goron Elder is the leader of the Gorons who live in Goron Village located in Snowhead. He is an older Goron and has a son who can be found in the Goron Shrine in the village crying due to him missing his father greatly. After realizing that the only thing that can calm the crying Goron down is his father, Link goes to try and find him. Link finally finds the Elder encased in a giant snow boulder and covered in ice. Depending on which day Link finds him, he can be found either near the entrance to Goron Village on the First Day, near the ramp in the Twin Islands (the area in Snowhead where two hills are surrounded by water) area on the Second Day, and on the Final Day next to the Owl Statue in Mountain Village. The Elder's location changes and this shows that he headed to Snowhead, possibly to find out the cause of the snow covering the area and to probably try and stop it. When Link scoops up Hot Spring Water (found either in the cave where Darmani's Grave is or in the hole that has ice over it on one of the islands in the Twin Islands area) and uses it on the ice surrounding the Elder, he unfreezes and is shocked to find Darmani (Goron Link) in front of him. He convinces himself that Goron Link is an illusion that is being created by Snowhead's magic and proceeds to walk away from him.

Upon hearing from Goron Link that his son is upset and is missing him, he attempts to teach him the Goron Lullaby, but he finds himself unable to remember all the notes to the song. He then teaches Goron Link the six notes of the song that he does remember. Upon playing those notes to his son, the young Goron teaches Goron Link the rest of it. After the Elder has taught the song to Goron Link, he begins to walk again obviously intent on reaching his destination. He becomes frozen again shortly afterward and there is nothing that Link can do to prevent it from occurring as it keeps happening. It only stops once Link has defeated the boss from Snowhead and restored spring to the area. After Link has completed Snowhead Temple, he finds the Elder in the Goron Shrine surrounded by fellow Gorons. He then announces that since he is getting old, it is time for him to choose a successor. He tells Goron Link that he has chosen him (thinking he is Darmani) to be his successor. He believes that everyone will be happy with Darmani being the patriarch of Goron Village.