From Zelda Dungeon Wiki
Jump to navigation Jump to search
Want an adless experience? Log in or Create an account.
Tijo 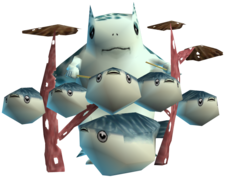 Tijo is a Zora from Majora's Mask. He is the drummer in the Zora band, The Indigo-Go's. He shares a room with his band partner, Mikau.[1] One time, Tijo tried to climb up Mikau's ladder, but he broke it and promised Link he would go on a diet because of his weight.[2][3]

Tijo reveals to Link that he has made a connection between the latest problems in Great Bay and singer Lulu's strange behavior as of late.[4][5] According to the legend, when problems affect the Great Bay Temple, the descendant of the Zora intended to protect the temple also is affected in a negative way. He seems to take the conclusion that Lulu is the protector in question.[6]