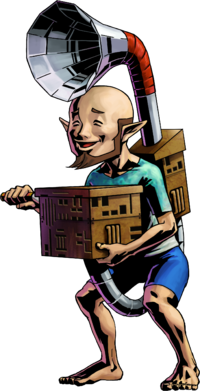 Guru-Guru is a character found in Majora's Mask and Oracle of Seasons. He is often seen to be playing a rather large instrument and is well known for his phrase, "go around, and around". His counterpart in Ocarina of Time is referred to as the Phonogram Man.

In Ocarina of Time, a very similar character to Guru-Guru can be found inside the Windmill in Kakariko Village. He will teach Link the Song of Storms.

In Majora's Mask, Guru-Guru is a member of the Gorman Troupe, a band of performers set to perform at the Carnival of Time. During the day, he practices his instrument in the Stock Pot Inn every night until dusk. After nightfall, he can be found in the Laundry Pool in south-west Clock Town. He tells Link a rather long and personal story about an Animal Troupe that he belonged to, where the Dog was the leader. As the leader, the dog wore a mask as a symbol of office. Due to jealousy, Guru-Guru stole the mask. In thanks for letting him clear his conscience, Guru-Guru rewards Link with the Bremen Mask

In Oracle of Seasons Guru-Guru is found next to the Windmill. He gives Link the Phonograph as a part of the Trading Sequence.