From Zelda Dungeon Wiki
Jump to navigation Jump to search
Want an adless experience? Log in or Create an account.
Gold Skulltula 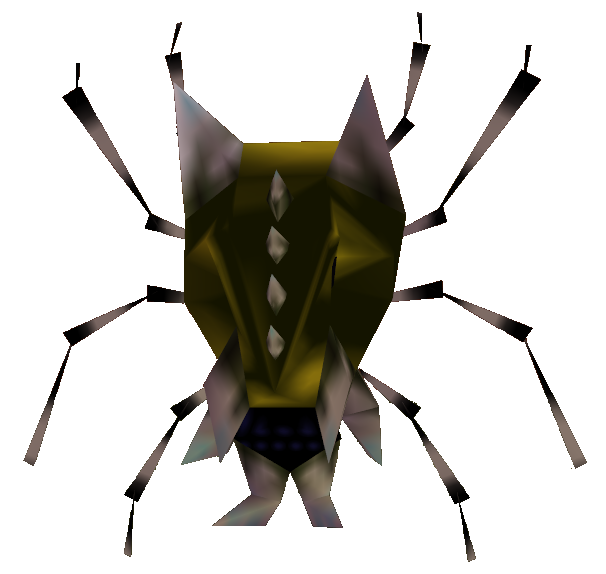 A Gold Skulltula as shown in Majora's Mask.

The Gold Skulltula, also known as the Spider of the Curse,[1] is an enemy and is part of an optional side quest from Ocarina of Time and Majora's Mask. Being able to be defeated with a multitude of weapons, a Gold Skulltula gives Link a Gold Skulltula Token when defeated.

In both games, a Gold Skulltula will make a rustling noise when nearby. They act just like normal wall Skulltulas from Ocarina of Time except that they do not move from their spot on the wall. They also take twice as many hits to defeat as the normal Skulltula.

There are a total of 100 Gold Skulltulas what Ganondorf scattered throughout Hyrule. Their tokens will help to break the curse put on the Cursed Rich Family living in the House of Skulltula. After they are defeated, Gold Skulltula Tokens can be collected with the Boomerang or Hookshot.

After collecting a certain amount of Gold Skulltula Tokens, Link can visit the House of Skulltulas to break the curse that Ganondorf put on various family members. These people will reward Link with a gift when spoken to. After collecting 10 tokens, Link is given the Adult's Wallet. When 20 spiders are defeated, the family will give Link the Stone of Agony. When Link collects 30 tokens, he gets the Giant's Wallet. When Link has defeated 40 Skulltulas, Link will be rewarded with Bombchus. At 50, Link will get a Piece of Heart, and at 100, Link will get unlimited Rupees. By the time Link collects all 100 Gold Skulltulas, the free Rupees will be almost worthless.

After defeating all 30 Skulltulas in the Swamp Spider House, the man at the entrance has been cured of his curse and will give Link the Mask of Truth. 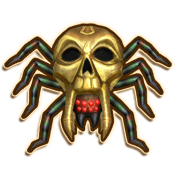 Gold Skulltulas are a collectible in Hyrule Warriors. Like in Ocarina of Time, a total of 100 Gold Skulltulas can be found throughout all of the stages. However, they only appear after specific requirements are met in the stage. Also, there are cases where they may not appear when certain characters are on the stage or certain weapons are used. When a character fulfills the requirements, a spider web appears on the map showing where the Gold Skulltula has appeared in the stage. One example of a place where they can hide is inside a boulder, making the character use bombs to destroy it. The Gold Skulltula escapes after a set amount of time, so the characters have to find them quickly. As the character gets closer, rustling noises can be heard, revealing it is nearby. Once they have uncovered and defeated a Gold Skulltula, they will receive a puzzle piece that gets them one step closer to completing an illustration.