From Zelda Dungeon Wiki
Jump to navigation Jump to search
Want an adless experience? Log in or Create an account.
Spike 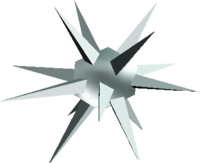 Spikes are enemies in Ocarina of Time and Majora's Mask. They are spiky, metallic balls that disguise themselves as rocks. When Link is close to them, they extend their spikes and roll toward him.

Spikes only appear in the Water Temple. They are first found in the main room on the sunken sand of the lowest floor.