From Zelda Dungeon Wiki
Jump to navigation Jump to search
Want an adless experience? Log in or Create an account.
Wallmaster 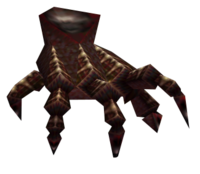 Wallmasters are recurring enemies in The Legend of Zelda series. They are similar to Floormasters in appearance.

Wallmasters debut in The Legend of Zelda, where they are frequently found in dungeons, and will come through the wall attempting to grab Link. This will result in Link starting from the entrance of the dungeon.

Wallmasters first appear within Skull Woods, the third dungeon of the Dark World. Unlike their appearance from The Legend of Zelda, Wallmasters come from the ceiling instead of the wall. Initially, they appear hidden as if they are not in the room. However, a shadow will appear and a noise can be heard as the Wallmaster drops from the ceiling. The Wallmaster will attempt to drop down and grab Link. If it successfully does so, it will take Link back to the entrance of the dungeon. In Skull Woods, since there are multiple dungeon entrances, it will take Link back to where he last entered the dungeon.

A Wallmaster can be defeated with two strikes from Link's Master Sword. However, even if one is defeated, new Wallmasters will continuously drop from the ceiling. Since there is an endless amount of Wallmasters in any particular room they appear, there is little reason to defeat them. Instead, Link is better off just avoiding them when they fall from the ceiling.

In Ocarina of Time, Wallmasters once again hang from the ceiling and drop down on Link. A shadow and an ominous noise will signal their approach, as well as a brief comment from Navi upon entering the room that suggests that Link watch out for the monsters. They are first encountered in the Forest Temple and later appear in the Shadow Temple, Spirit Temple and Ganon's Castle.

Wallmasters appear in dark places, such as Beneath the Well, and act just as they do in Ocarina of Time.

Wallmasters behave very similarly to other titles in The Minish Cap. They first appear in the Fortress of Winds and Link can see where they will drop down by looking at their shadow. If they grab Link, he will be transported back to the beginning of the dungeon. If defeated, they disappear permanently.

Wallmasters behave in a similar manner to that of A Link to the Past in that they come down from the ceiling, grab Link and take him back to the beginning of the dungeon. In this game, Wallmasters are used to activate switches on an unreachable platform above Link, allowing Link to progress. Wallmasters in this game can be found in Skull Woods and Lorule Castle.

Wallmasters can be found in Harlequin Bazaar and Fortress Centrum. They appear in the background through small holes. They will reach their hand out of the hole in the wall and try to hit Link. They cannot be defeated and should be avoided whenever possible. Using Ropes to climb to higher ledges is the best way to stay away from these creatures.

In this game, Wallmasters appear in Tykogi Tower and Dodomai Palace. They look like and act the same as in The Faces of Evil.