From Zelda Dungeon Wiki
Jump to navigation Jump to search
Want an adless experience? Log in or Create an account.
Lanmola 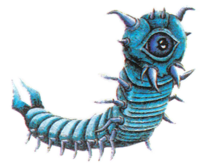 Lanmola Artwork from The Legend of Zelda Manual

Lanmolas are recurring enemies in The Legend of Zelda series. In A Link to the Past, Lanmolas serve as the Boss of the Desert Palace, and in Link's Awakening, they serve as Mini-Bosses. However, in the original The Legend of Zelda, they appear as a regular enemy.

There are two types of Lanmolas found in The Legend of Zelda: A slower red one and a faster blue one. Both types are only found in the final dungeon of the game, Death Mountain. They can be defeated with constant Sword strikes to their head. They appear multiple times throughout the dungeon.

Main article: Lanmola (A Link to the Past)

In A Link to the Past, the Lanmolas are the boss of the Desert Palace. However, instead of fighting one Lanmola, Link will have to fight three of them at once. The Lanmolas later appear as a Mini-Boss in Ganon's Tower.

There are only two Lanmolas in Link's Awakening, similarly to A Link to the Past. The first Lanmola is found in the Yarna Desert, guarding the Angler Key, which is needed to gain access to the fourth dungeon in the game, Angler's Tunnel. The second time is during the final boss battle, where The Shadow Nightmares takes a form of the Lanmola.

In The Wind Waker, Lanmolas are found in the Wind Temple and are a component of the boss fight with Molgera. Every cycle of damaging the boss when he burrows back underground and flies up into the air, multiple Lanmola will appear in the sand and leap at Link, increasing in number the more damage Link deals to Molgera. The most effective way of dealing with them is to L-Target them and Hookshot them while they are swimming in the sand near Link, pulling them out of the sand and right next to Link. They can then be attacked with Link's sword.