From Zelda Dungeon Wiki
Jump to navigation Jump to search
Want an adless experience? Log in or Create an account.
Helmasaur

Helmasaur from A Link to the Past

Helmasaurs, also known as Iron Masks and Hiploops, are recurring enemies in The Legend of Zelda series. They make use of their hard masks in their front as a defense against most weapons. The easiest way to damage them is from behind or to forcibly remove their masks by various means.

Helmasaurs are first encountered within the Dark Palace, the first dungeon in the Dark World. These creatures wear an armored green mask on their head, making them invulnerable to sword slashes. The rest of their body is a soft brown color and is susceptible to most weapons. Their only form of attack involves charging directly into Link, which does a full heart of damage.

Link is able to defeat a Helmasaur with a single slash from his Master Sword. However, the attack must hit the enemy from the back or the side, as its armored mask prevents damage from the front. If Link has full power, he can shoot his Beam Blade attack right at the Helmasaur and can defeat him with two strikes, regardless of where he hits them from.

There are several alternative ways to defeat this creature. Link can sprinkle some Magic Powder on the Helmasaur, causing it to turn into Slime, making it easy to defeat. After Link acquires the Magic Hammer from the Dark Palace, this can be used to defeat the enemy in one hit.

The boss of the Dark Palace is the Helmasaur King, an oversize version of a Helmasaur. A more difficult variation of this boss is encountered within the Palace of the Four Sword.

In Link's Awakening, there is a very similar enemy referred to as an Iron Mask. It is very similar to a Helmasaur and is defeated in a similar fashion.

Called by their original Japanese name in Majora's Mask, Hiploops are encountered in both the Woodfall Temple and the Stone Tower Temple. In the game, they charge at Link many times knocking him off the edge of something. Without their masks on they look more like insects in this game than the dinosaur look seen in the other games of the series. Link can turn the enemies around by using his shield, or taking off their mask using the hookshot.

In both Oracle of Seasons and Oracle of Ages, the same Iron Masks from Link's Awakening make their re-appearance.

Called Hiploops once again, these enemies make a return in Four Swords. In this game they are red, with a pointed helmet (making them look more like Iron Masks from the Oracle games and Link's Awakening). If they see Link, they will charge at him, and he must dodge and then slash at their exposed back.

A simpler method employs the Magnet, which is usually found in areas where Hiploops appear, to pull off their helmet. Now vulnerable to all attacks, they will run away, but after a bit they will just move around randomly, hurting Link if he touches them.

Returning in The Minish Cap, they look just like they did in Four Swords. Be careful of their sharp, protective mask, as the Helmasaur will charge at Link once they see him. They can be defeated with one slash to their backside, but you can also blow off their mask using the Gust Jar as a simpler approach to remove their defense. 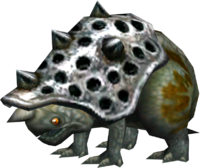 In Twilight Princess, they can be found in the Lakebed Temple, City in the Sky, Cave of Ordeals, and Hyrule Field. In this game they look more dinosaur-like, having greyish-green skin and wearing a mask on the top of their head. In the game, they will charge at Link requiring him to dodge them. If Link can get to the backside of this monster, he can then attack it by slashing at it with his sword. He can also remove the mask with the Clawshot, causing it to lose its only form of defense. After it loses its mask, it can still charge at Link though, so it is best to take it out quickly. After defeating it, the enemy will leave behind its mask, which can be picked up and used by Link for tossing at enemies and for weighing down switches. He also picks up the mask if he uses the clawshot on it.

This is a unique variation of the Helmasaur that only appears in Twilight Princess. It can be found at the City in the Sky and cannot have its mask removed. This means that the only way of defeating it is to wait for it to charge and then dodge, hacking away at its backside.

A Link to the Past Enemies[edit][hide][show]
Retrieved from "https://www.zeldadungeon.net/wiki/index.php?title=Helmasaur&oldid=451751"
Categories:
Hidden category: