From Zelda Dungeon Wiki
Jump to navigation Jump to search
Want an adless experience? Log in or Create an account.
Snap Dragon 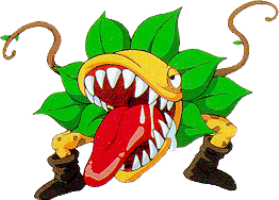 Snap Dragons are enemies from A Link to the Past and A Link Between Worlds. According to the folklore, they were created as the result of a Mad Alchemist's plant experiments.[1] They resemble a large plant with a dragon-like mouth full of sharp teeth.

Snap Dragons are one of the first enemies Link encounters near the Pyramid of Power in the Dark World. They are often found alongside larger groups of enemies. Snap Dragons hop around, trying to run into Link. They hop around rather slowly, but if Link draws near, they can quickly run in his direction. These enemies are unique in that they can only move diagonally. This leaves an opening in their defense, as Link can safely approach them from the sides.

Despite their rather simplistic look, these enemies can deal quite a bit of damage. If they come into contact with Link, they will do three full hearts of damage. They can also withstand some damage themselves, with Link needing three strikes from the Master Sword to defeat them.

Snap Dragons are one of the many enemies where Link can sprinkle Magic Powder on them, causing them to transform into Slime creatures.

A Link to the Past Enemies[edit][hide][show]
Retrieved from "https://www.zeldadungeon.net/wiki/index.php?title=Snap_Dragon&oldid=393584"
Categories:
Hidden category: