From Zelda Dungeon Wiki
Jump to navigation Jump to search
Want an adless experience? Log in or Create an account.
Yellow ChuChu 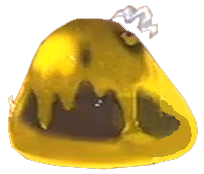 Yellow ChuChus appear in most Zelda games, and are basically the same in each, except for a few exceptions.

This yellow variation of ChuChu are particularly useful in dungeons where you use your bow a lot as they contain 10 Arrows. They appear in the Great Bay Temple and the Stone Tower Temple. They can be defeated in the same way as the other ChuChu; with your sword or virtually any other weapon in the game and will respawn after a certain amount of time.

Yellow ChuChu's appear as little orange electrified blobs, found in the Tower of the Gods and the Savage Labyrinth. You defeat them the exact same way as blue chuchu's, only they are more common. Effective weapons include: Bombs, the Hero's Bow and the Boomerang.
They can drop either Green or Red Chu Jelly, but also drop Rupees, bombs and arrows etc.

Yellow ChuChus are very annoying to deal with. You can't attack them while they are electrified, you'll have to wait until they stop sparking. If you do run into them, or try to attack with your sword, you'll lose some health and your map will become pixelated for a few seconds. A good way to defeat them is to use your boomerang to stun them, and then go in for the kill.

Yellow Chus are essentially the same in this game as in Phantom Hourglass, along with the Whip and Whirlwind being able to stun them. They have an electric charge and Link will hurt himself if he attacks the chuchu when it is charged up. The yellow chuchu will also jump towards Link, but this attack is rather slow and easy to avoid. Link can just wait for the electric charge to go away, which will allow him to slash with a sword to defeat them. Alternatively, Link can use his Whip to defeat them.

Yellow ChuChus are found in Lanayru Mine, Lanayru Desert, Lanayru Mining Facility, Lanayru Sand Sea, and Sandship. This ChuChus are especially dangerous because of the electrical charge they give off in addition to attempting to absorb Link. If you strike the ChuChu while it is electrically charged Link will be shocked and loose a heart. To not take damage, Link must only attack them when they are not electrified.

The Yellow ChuChu does not appear in Breath of the Wild; but a similar enemy, the Electric Chuchu replaces it.