From Zelda Dungeon Wiki
Jump to navigation Jump to search
Want an adless experience? Log in or Create an account.
Stalchild 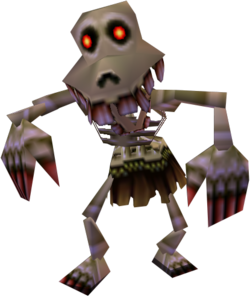 Stalchildren are enemies in Ocarina of Time and Majora's Mask. They are not much of a threat alone, but they can be a nuisance to Link when they attack in groups like they usually do.

In Twilight Princess, there is an enemy that is very similar to the Stalchildren, called Stalkin.