From Zelda Dungeon Wiki
Jump to navigation Jump to search
Want an adless experience? Log in or Create an account.
Fire Eye 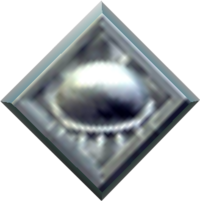 The Fire Eye is an enemy trap that appears in Ocarina of Time and Majora's Mask. It appears as an Eye Switch, but as Link draws near, the switch will shoot out a slow fireball. These fireballs will continue to chase Link around, but they can be blocked with a Shield. The Fire Eye can be defeated with a single Arrow strike while its eye is open.

There is only one Fire Eye in the normal quest of Ocarina of Time, appearing within the Shadow Temple. In the Master Quest version of the game, there are several additional Fire Eyes found throughout the Shadow Temple.

In Majora's Mask, Fire Eye's are found exclusively Beneath the Well. These Fire Eyes give out much more powerful and prolonged flames which cannot be blocked using a shield.