From Zelda Dungeon Wiki
Jump to navigation Jump to search
Want an adless experience? Log in or Create an account.
Guay

Guays are recurring enemies in The Legend of Zelda series. They usually come in flocks, and dive at Link's head to attack. They often leave hefty Rupee awards when either defeating an individual Guay, or a large flock.

Guay from Ocarina of Time and Majora's Mask

In Ocarina of Time and its 3DS remake, Guays only appear at the Desert Colossus, Lake Hylia, and Lon Lon Ranch at night. Link can use ranged attacks, such as his Slingshot, Boomerang, Hookshot, or Bow to defeat these birds. Alternatively, a timed sword slash when they dive down also defeats them. After Link defeats a Guay, another one respawns a few moments later and they will infinitely respawn. After defeating a number of Guay, a larger Big Guay appears, which is just as easy to defeat, but it gives an even larger sum of Rupees as a reward.

Guays are sometimes found near tall ladders, including a Guay that appears above the Lakeside Laboratory. A Piece of Heart can be found atop the ladder, but the Guay makes it much more difficult to reach the peak as it flies into Link while he is climbing the ladder. They almost always need to be defeated so that Link can reach his destination.

In Majora's Mask and its 3DS remake, Guays are similar in look to the ones from Ocarina of Time having purple-colored bodies and orange beaks. They mostly appear in trees. Guays can also be found near the pond in Snowhead during Spring, and also in Ikana Canyon.

There are also two non-aggressive guays which drop money:

In Twilight Princess and its high-definition remaster, Guays have a different appearance, looking more like an actual bird and having more of a twisted enemy design. They look closely based on a vulture and have bright blue eyes. They usually attack in flocks, but they can also be found alone, nesting in trees or on top of rocks. When these enemies attack Link, they continue to attack until Link has run away or defeated all of them. A large group of Guays can be found in the Graveyard at Kakariko Village and if Link defeats the entire flock, a large sum of rupees will fall from the sky. 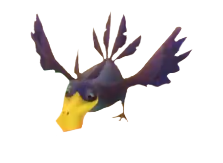 In Skyward Sword and its high-definition remaster, these small bird-like enemies dive-bomb Link if they spot him. When these enemies dive down toward Link, Link can Shield Bash them, causing them to be stunned and fall to the floor. Link can finish them off with the Fatal Blow. However, if Link doesn't defeat them in time, the Guays will recover and take flight once again.

They also have a secondary ability to drop spirals of manure on Link's head. This creates a noxious yellow cloud that drains hearts until he shakes it off. When the Guay is defeated, it drops either 5 or 20 rupees.

Guays can also be found in open areas of The Sky, carrying rupees. Link can fly directly into the Guay while on his Loftwing to gather these extra rupees.