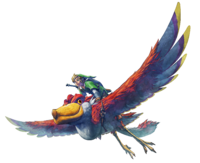 Loftwings are flying creatures native to The Sky in which Link and Zelda's hometown of Skyloft is located in Skyward Sword. They are crucial to the culture of Skyloft as images of the birds appear all over Skyloftian carvings and clothes. The people of Skyloft each own a bird partner who they meet at an early age and trust with their lives as they dive straight off the floating island, trusting that their bird will hear their call and catch them as they fall. The birds are the primary form of transportation between the floating islands for the Skyloftians.

Two specific sky birds belong to Link and Zelda, with Link's being red and Zelda's being a dark blue, almost purple color. The two birds appear to be close friends just like their owners, as they can be seen flying together even without Link and Zelda present. The sky birds are crucial to the Wing Ceremony in which several competitors ride their birds and attempt to chase down a small golden Loftwing carrying a statue. The victor will be rewarded with a special gift from none other than Zelda herself.

Link's red loftwing is known as a Crimson Loftwing. Gaepora says it is very rare, fast and powerful. There was a time when they thought that the Crimson Loftwing might have gone extinct.[1] There are many other types and colours of Loftwings.

Apparently Loftwings have limited night-vision, and thus cannot be called during nighttime. Rescue Knights on the night shifts therefore have lanterns attached to the heads of their Loftwings.