From Zelda Dungeon Wiki
Jump to navigation Jump to search
Want an adless experience? Log in or Create an account.
Phantom 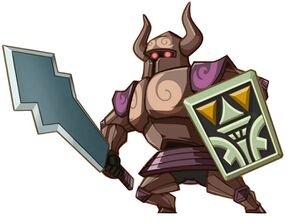 A Phantom is a being made of strong armor and virtually indestructible, requiring certain strategies in order to sneak past them. They appear in both Phantom Hourglass and Spirit Tracks, and are usually in charge of guarding something sacred. It only takes one hit from a Phantom's sword to fell Link, another reason why they are so dangerous. Despite their power, their hits only take one heart away from Link, but they do send him back to the beginning of the floor he is on, or to the door that he last entered through. Because of their thick armor, they are able to walk over spikes, through lava, and even through fire without getting hurt.

Phantoms can be found on Link's map if they are in the room, with a small moving picture that depicts what type of Phantom they are and an orange cone that shows their line of sight. If Link enters their orange cone of sight, they will break off from their regular patrol route to search for and attack Link. Link can escape them by going into a Safe Zone, where they cannot see him or follow. A Phantom Eye aids a Phantom, having a normal patrol route like the other Phantoms, except they themselves cannot hurt Link; they just latch onto him and slow him down until a Phantom can get there.

In this game, Phantoms are used to patrol the Temple of the Ocean King, commanded and created by Bellum. If Link is attacked by a Phantom, it steals 30 seconds of the Sand of Hours in the Phantom Hourglass. They cannot be hurt or stunned by any weapon except the Phantom Sword, whose only purpose of creation was to defeat them. Besides the sword, Link could also make a boulder roll into one, crushing it, or to cause it to fall into a pit. If Link shoots an Arrow at their back, they will be stunned for some time. Another disadvantage towards Link is that the Phantoms can pick up Force Gems and small keys. Link must take the offensive to retrieve any item taken by a Phantom.

The regular Blue Phantom is the most common and least dangerous of all the phantoms encountered. These Phantoms wear blue armor and move around rather slowly.

The Gold Phantom moves at the same speed as the Blue Phantom, but they have the unique ability to warp around the room. If Link is spotted by either a Phantom Eye or another Phantom, the Gold Phantom will immediately warp and appear right where Link was spotted. Unlike its Phantom brethren, a Gold Phantom wields a large axe.

Phantom Trio: These Phantoms only exist in the multiplayer battle mode. These Phantoms act like regular Phantoms, except they can still see Link when he is in a Safe Zone and can pick up power-up items (not Force Gems)

Again guardians in this sequel to Phantom Hourglass, these creatures protect the Tower of Spirits. Under normal circumstances, these Phantoms do not harm innocent people. But, because of the corruption of the Spirit Tracks and the evil in the air from Chancellor Cole and Malladus, their attitudes become distorted. They are almost the same as the Phantoms from Phantom Hourglass, except if they are completely defeated they just respawn back at the beginning of their patrol route.

Phantoms are much more of an important resource in this game, considering Link requires their help to overcome certain obstacles and puzzles. There's only one problem: the Phantoms are much more intent on killing Link, not helping him. Because Zelda's spirit has been separated from her body, she has the power to possess Phantoms. Even so, she cannot just intrude and take over the body of the Phantom. Link must first gather all the Tears of Light to power up his sword and then strike a Phantom in their weak spot on their back to temporarily stun them.

Later in the game, Link no longer needs the Tears of Light to stun a Phantom. He can either use the energy from the Lokomo Sword or shoot them in the back with an arrow from the Bow of Light. With them stunned, Zelda is free to possess the body and command it to do what she tells it to. After Zelda enters the Phantom its appearance changes, its eyes and armor turning shades of pink. Being in the Phantom's shell, Zelda is able to speak to the other Phantoms and distract them, allowing Link to sneak past. She also helps Link with attacking and defending, and is necessary to solve many puzzles throughout the Tower's floors. The player controls Zelda much like they controlled her early in the game when Link helped her escape from Hyrule Castle. She can be commanded to go in front of Link, to step on a switch, or just to stand in place and stay out of the way.

Defying the Phantom's abilities, she is also able to enter Safe Zones. Link will not be allowed to leave a floor or enter a door without Zelda being right behind him. Zelda can be used to carry Link on her shield to get him higher up into the air, or to cross obstacles that Link normally couldn't such as fire, spikes, and lava. The princess can also stop rolling boulders just by pushing them away. She also is able to carry other object besides Link, most importantly a Boss Key that has been electrified to prevent Link from touching it. Because of her defensive and offensive skills, Zelda can also be used to help fight enemies such as a Geozard, Byrne, and Malladus, though she is dreadfully afraid of rats and will become paralyzed with fear if one comes near her.

Phantoms in Spirit Tracks have different appearances and abilities than those in Phantom Hourglass. When Zelda becomes one of these types, she also becomes able to use any of their characteristics.

- Regular Phantom: This is a regular Phantom, with no special abilities, and are the most common and least dangerous Phantoms. They have a green-tinted armor color.

- Torch Phantom: These Phantoms are a rich red color, and hold a sword covered in flames. The swords can be used to light up dark rooms to help Link see where he's going. The light is also able to stun ghosts and make them easier to defeat. Zelda can use this Phantom's sword to light a torch, solving puzzles or just creating a light source to help visibility.

- Warp Phantom: These Phantoms, who have a distinct blue color and rounded horns on their helmets, are able to warp from spot to spot wherever they need to. However, when Zelda becomes a Warp Phantom, she is only able to warp to spots where there are Phantom Eyes.

- Wrecker Phantom: This Phantom is a blackish-brownish color and has the ability to roll itself into a ball to quickly get from one place to another, destroying everything in its path. Zelda, while possessing this phantom, is unable to distract other Phantoms; but when commanded, Zelda will just roll into then and stun them instead of talk. It is also unable to carry object or Link, for if Link stands on her shield and she begins to roll, Link will fall off.