From Zelda Dungeon Wiki
Jump to navigation Jump to search
Want an adless experience? Log in or Create an account.
Gold Phantom 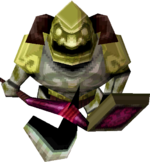 The Gold Phantom is an enemy from Phantom Hourglass that appears exclusively within the Temple of the Ocean King.

These Phantoms move at the same speed as the standard Blue Phantom and are thus, not very dangerous. However, they have the unique ability to warp around the room. If Link is detected by a Phantom Eye or another Phantom, a Gold Phantom will warp over to his location immediately. If a Gold Phantom strikes Link, he will lose 30 seconds of Sand of Hours from his Phantom Hourglass.

Gold Phantoms are first encountered when Link makes his way to Floor B10 of the Temple of the Ocean King. They are subsequently found on every floor thereafter. Some of these Gold Phantoms are carrying, or can pick up, Force Gems that they encounter. In order to get a Gold Phantom to drop a Force Gem, Link can shoot the Phantom in its backside with an Arrow, temporarily stunning the enemy. During his final trek through the Temple of the Ocean King, Link has acquired the Phantom Sword and can defeat a Gold Phantom with a sword slash to its back.