From Zelda Dungeon Wiki
Jump to navigation Jump to search
Want an adless experience? Log in or Create an account.
Postbox 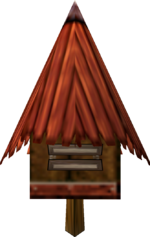 Postboxes, also known as Mailboxes, are recurring objects in The Legend of Zelda series. They can be used to deliver or collect Letters. Sometimes, these Letters contain items, including a Piece of Heart or Rupee.

Postboxes in Majora's Mask can be found in various locations of Clock Town. They can only be used to deliver letters. The Postman usually comes running throughout Clock Town and picks up Letters and delivers them. Two letters can be delivered as a part of a quest; the Letter to Kafei and Letter to Mama.

Postboxes in The Wind Waker can be found on several islands in the Great Sea. They 'dance' whenever a letter is delivered to Link. The letters always contain an item, most often Rupees. When receiving some letters, Link is required to pay a fee, usually a large sum. Link is also charged a fee when sending letters, depending on how far away the target location is from Dragon Roost Island. On that note, the Mail Center itself is run by the Rito, who live on Dragon Roost Island. Quill is a mailman who gives Link useful information derived from his constant travelling.

Postboxes are located on the islands of the World of the Ocean King in Phantom Hourglass. When the Postbox is squirming, Link may approach it and the winged messenger will hand him a letter.

In Spirit Tracks, Postboxes are located near the train stops at the various train stations scattered across New Hyrule. When the Postbox is squirming, Link may approach and the Postman will appear with a letter for him. Additionally, Link may mail letters to win rare collectibles.