From Zelda Dungeon Wiki
Jump to navigation Jump to search
Want an adless experience? Log in or Create an account.
Snowhead Temple

Exterior of the Snowhead Temple

Snowhead Temple is the second Dungeon in Majora's Mask. It is located deep in the region of Snowhead.[1][2] To gain access to the temple, Link must obtain the Goron Mask to traverse the snow ramps on the road to Snowhead Mountain.[3] Link is unable to access it at first due to a harsh blizzard, but upon closer inspection with the Lens of Truth, this is shown to be the effect of a large Goron.[4] Link must play the Goron Lullaby in order to put the large Goron to sleep, thus gaining access to the entrance.[5]

The primary theme of the temple is ice, though lava is present on the bottom floors. The dungeon itself revolves around a central structure which is composed of four separate floors and a basement. Link's main task to navigate towards the top floor of the dungeon where the boss room lies. Link must make use of the Goron Mask here in order to progress through many of the temple's puzzles. Here, Link obtains Fire Arrows, which he gets after facing a Wizzrobe, the dungeon's first mini-boss.[6] After facing the second Wizzrobe, Link obtains the Boss Key, which allows him to enter the boss room on the fourth floor. The boss of this specific temple is Goht, the Masked Mechanical Monster, who upon defeat yields Link his remains.[7] In addition, after defeating the boss of this temple, Snowhead's harsh winter subsides and spring returns to the region.[8] Lastly, if Link collects all 15 Stray Fairies in the temple, the Great Fairy rewards him by doubling his Magic Meter.[9][10] 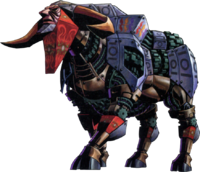 Goht is the main boss of the Snowhead Temple. He seems to be a large mechanical goat. It is believed that he is behind the harsh winter within the Snowhead region. Upon entering the boss room, Link finds Goht frozen in ice. Once Link shoots a Fire Arrow, the ice melts and the Mechanical Monster awakens. This boss battle takes place in a circular room, which features a number of ramps and Magic Jars. The objective of this boss battle is to chase Goht around the room in Goron form and eventually use the spikes when rolling to crash into him.[11] However, Link must dodge many of Goht's attacks and traps, such as blockades, bombs, falling rocks and a lightning attack. After successfully attacking Goht a number of times, the Mechanical Monster crashes into a nearby wall and is defeated. Link is then rewarded with a Heart Container and Goht's Remains.

The Dungeon Map is quite an important item within this dungeon, as it shows Link the layout of the many floors and rooms, therefore making it exceedingly easier to navigate. The Map itself is the first dungeon item Link comes across, but it is not mandatory for completion. It is located within the elevator room, which also includes a Real Bombchu. After defeating this enemy, Link can open the large Treasure Chest, which contains the Map.

This is the second dungeon item Link comes across in the Snowhead Temple, and it shows the location of the many treasure chests within the dungeon. The Compass helps Link locate and find many chests much more efficiently and is important in finding the Boss Key. Much like the Dungeon Map, this item isn't necessarily needed in order to complete the dungeon. The Compass is located to the right of the first room and is only accessible once Link finds a Small Key.

The Boss Key is the final dungeon item within this temple. Unlike the Compass and the Dungeon Map, it is actually compulsory, as it is needed to access the boss room of Goht. In this dungeon, the Boss Key is located on the fourth and highest floor. To obtain the item, Link must face the second mini-boss of this dungeon, the second Wizzrobe. After the Wizzrobe is defeated, the path to the next room is now clear, and it is here where Link finds the chest containing the Boss Key.