From Zelda Dungeon Wiki
Jump to navigation Jump to search
Want an adless experience? Log in or Create an account.
Twin Islands 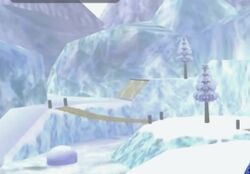 Twin Islands refers to a location seen in Majora's Mask. This location lies within Snowhead, the second region of the game. It is generally known as the path between two notable locations, the Mountain Village to the west and the Goron Village to the east. The Twin Islands is actually home to three islands, but the game refers to the location as it being the Twin Islands. This may be due to the fact that the area has two main islands situated above the ground and the third simply acts as an in between point. This location is also home to the Goron Racetrack, which is situated to the northwestern part. In the winter, this location is filled with snow, while in the spring, the snow melts and the location is filled with water. Common enemies that appear in this area include White Wolfos and Tektites.

Link first comes upon this area when on the Road to Mountain Village. Link can stop by and encounter Tingle, who offers Link two maps, a map of Snowhead for 20 Rupees and a map of Romani Ranch for 40 Rupees. Link returns to this area later on his quest in Snowhead to search for the Goron Elder. Depending on what day it is, the Goron Elder is located within one of the large snow boulders. Link melts the frozen Elder with Hot Spring Water and he teaches Link part of the Goron Lullaby.[1] Link can use this part of the song and learn the remaining part from the Goron Elder's Son, allowing Link to advance to Snowhead Temple.

After defeating the Mechanical Monster: Goht, the region of Snowhead enters the season of spring, thus the snow subsides. This allows Link access to the Goron Powder Keg Shop, where Medigoron tasks Link with taking a Powder Keg to blow up a large boulder, which is situated within the Twin Islands area.[2] Link traverses carefully across the bridges and manages to destroy the boulder. This reveals that path to the previously un-accessible Goron Racetrack, where Goron Link can take part in the annual race.[3][4]