From Zelda Dungeon Wiki
Jump to navigation Jump to search
Want an adless experience? Log in or Create an account.
Goron Village 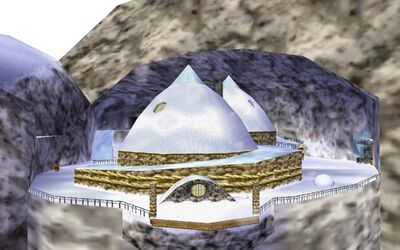 Goron Village is the location of Goron settlements in Majora's Mask and Spirit Tracks.

Goron Village is located in the Snowhead Region. It is the location of the Goron Tribe, who live here in the Goron Shrine. The Powder Keg Goron is also found here, as well as the Lens of Truth and the Business Scrub.

To the East of Goron Village, there is a large void with an apparent "floating cave" on the other end, known as Lone Peak Shrine. Link must talk to Kaepora Gaebora, who instructs Link to let his feelings guide him, so the true path shall open before him, which means that Link should jump where Kaepora's feather lands. Once inside the cave, a Treasure Chest appears containing the Lens of Truth, in addition to a few invisible Skulltulas.

A cave to the north containing Medigoron's Goron Powder Keg Shop is blocked by ice. It can only be entered after either collecting the Fire Arrow from Snowhead Temple to melt the ice blocking the entrance, or by defeating Goht and causing winter to end, also melting the ice. Inside, Link can obtain a Powder Keg from Medigoron to open up the Goron Racetrack. By successfully doing this, he has the ability to carry one these bombs, which are only usable as Goron Link, as well as be able to purchase them from the Goron in the Clock Town Bomb Shop. 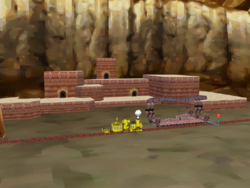