From Zelda Dungeon Wiki
Jump to navigation Jump to search
Want an adless experience? Log in or Create an account.
Goron City 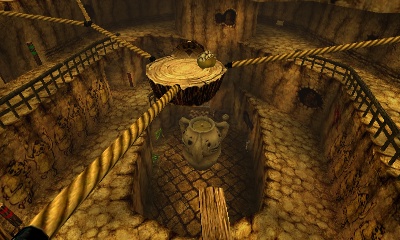 Goron City is a location in Ocarina of Time and Breath of the Wild. It is typically a settlement for Gorons in close proximity to Death Mountain.

In Ocarina of Time, Goron City is home of the Gorons.[1] It is found below Death Mountain Crater in the mountain, Death Mountain. As a child, Link visits the city to obtain the Goron's Ruby from Darunia. After cheering the Goron leader with Saria's Song, Link is given the Goron's Bracelet and tasked with clearing out Dodongo's Cavern, which Ganondorf sealed off after Darunia refused to give him the Ruby. The Cavern is the location of the food the Gorons who reside in the city feed on, so they are all starving.[2]

In the future, Ganondorf revived the Dragon, Volvagia, who captures and eats the Gorons.[3] Due to this, Goron City is much less populated. One of the Gorons here is named Link after the hero who cleared out Dodongo's Cavern seven years earlier. This Goron is Darunia's son, and tells Link that he went in the Fire Temple to rescue his people from the jaws of the dragon.[4] In doing so, he also rewards Link with the Goron Tunic.

The highest floor of the Goron City has a small platform held by ropes. On it lies a stone with the Goron symbol engraved on it, and it used to have the Goron's Ruby set on it.

Link can purchase the Giant's Knife from Medigoron within the city at this time for 200 Rupees. This is a rip-off, as the blade breaks after just eight swings.

When Link first visits the Goron City, he can proceed to the lowest floor and play Zelda's Lullaby on the soft carpet, which allows him to access Darunia's room. When Link meets Darunia, he expected to see the messenger of the Royal Family, not a child. Darunia says that he is frustrated due to the infestation in Dodongo's Cavern. Link can lighten his heart by playing Saria's Song, which will make him happy and start to dance around. Darunia thanks Link for his effort, and gives him the Goron's Bracelet, which gives Link the ability to pull up Bomb Flowers when worn.

Goron City can be found on the western side of Death Mountain; The searing heat makes it near impossible for anyone but a Goron to live there. The location is mainly a mining village, and the boss of the village acts like a foreman of sorts. If Link attempts to get to Goron City with no Fireproof Elixir, he will catch fire and lose hearts.