From Zelda Dungeon Wiki
Jump to navigation Jump to search
Want an adless experience? Log in or Create an account.
Lost at Sea Station 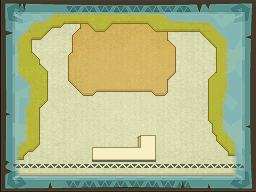 The Lost at Sea Station is an area closely resembling The Temple of the Ocean King from Phantom Hourglass. In fact, the both areas' music feature nearly the same soundtrack. Phantoms patrol all five floors of this area.

Level one requires three torches to be lit with the Boomerang. Two regular Phantoms scout the area. A treasure chest is located within the safe zone.

Level two is completely dark bar the two Torch Phantoms, torches, and the light emitted from safe zones. To move on use the Whirlwind to extinguish the torches. A treasure chest can be found in the unlit east corner of the room.

Level three is monitored by two Warp Phantoms and a Phantom Eye. Pulling the four switches in the room with the Whip is necessary for progress. Pull the right switch on all of them except the top left pair (where the left switch is correct) to get the door to open. A chest is located in the northeast corner of this floor.

Level four is patrolled by Wrecker Phantoms. Use the power of these brutes or your Bombs to break the cracked walls and move onto the final floor. Two treasure chests can be found in the safe zones.

Level five is guarded by one of each variety of Phantom. In order to snag the final prize, all four treasure chests must be opened. The northeastern chest is unprotected and therefore the easiest to obtain. The southeastern one requires the bombing of a cracked wall or leading a Wrecker Phantom to it. Two switches are located near the third chest. The left one lowers the spikes for the northwestern chest- the other causes a Phantom Eye to appear in the center of the room. Light the second torch near the entrance to the treasure room to access the final chest.

The reward for completing the station is a Regal Ring.