From Zelda Dungeon Wiki
Jump to navigation Jump to search
Want an adless experience? Log in or Create an account.
Tunnel to the Tower 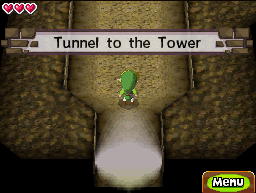 The Tunnel to the Tower is a location in Spirit Tracks. As its name implies, it is a tunnel that leads from the back exit of Hyrule Castle to the Tower of Spirits. It is only needed at the beginning of the game, before Link has acquired the Spirit Train. Once Link acquires the Train the entrance to the tower is blocked off by a rock.[1]

After Chancellor Cole and Byrne kidnap Zelda's body, Link and Alfonzo are brought back to Hyrule Castle. Zelda tells Link that she wants to head to the Tower of Spirits yet again and asks him to accompany her.[2] Because the Spirit Tracks are gone, she tells Link to search for this hidden path to the tower, even though it has not been used for a long time.[3] However, the guard at the back door does not allow Link through without a weapon to protect himself with, so Zelda suggests they ask the Guard Captain for a Recruit's Sword.[4][5] When they retrieve the weapon and exit outside, they find a guard surrounded by Spinuts, who, after saving him, tells them that rocks have fallen and are blocking the way to the tunnel.[6] Link can use the Bomb Flowers there to open the entrance.

The actual tunnel serves as an early tutorial to fighting simple enemies and puzzle solving. The tunnel is littered with basic enemies including Keese and Red ChuChu, as well as classic Zelda puzzles.

After Link has reached the Tower of Spirits, he and Zelda speak with Anjean about the disappearance of the Spirit Tracks.

Upon entering the tunnel, Zelda describes the tunnel as being very dark and damp.[7] Link encounters Keese here, as well as four Red ChuChus. A sign teaches him how to push a block on to a switch,[8] which opens up a door to a treasure chest containing a Small Key. The Key opens the door blocking the staircase to the second floor.

The second floor has a puzzle in which Link must read the signs to find out what order in which to hit the switches with his sword. Hitting them in a circle does not open the door.[9] Instead, there are three signs that tell him the order.[10][11][12] The correct order in hitting the switches is right, top, bottom, and left. There is also a treasure chest containing a Red Rupee, as well as some Spinuts guarding the switches.

On the third and final floor, Zelda appears, asking if Link hears squeaking.[13] When two rats appear, Zelda shrieks in terror and later thanks Link after he defeats them.[14][15] A staircase at the north of the area takes them outside of the tunnel and into the tower.