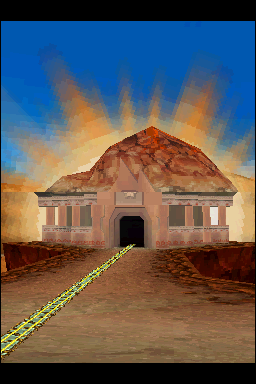 The Fire Temple (Mountain Temple in the European version) is the fourth dungeon found in Spirit Tracks. A puzzle must be solved in order to access the dungeon.[1] The Bow can be acquired here. The boss of this temple is Lava Lord, Cragma.

Upon entering the room, a short cutscene will play. Cragma will initiate the battle by smashing the ground with his fists while boulders fall from the ceiling. In the process he will expose a weak yellow spot on his torso. This gives Link the opportunity to shoot at it with his Bow.

After shooting his weak spot, Cragma will start to pound the ground with both of his fists. A circular platform will appear from the pressure of these blows. Toss it into the lava to board the adjacent mine cart.

Make sure to hit Cragma's weak points while riding on the mine cart. Once more, these are the yellow spots littered around his exterior. Try not to miss because if you do so frequently, Cragma will toss you back to lower ground and you must repeat the process all over again. The boss will eventually collapse and at this point the mine cart will lead you back to lower ground. This is the chance to slash at Cragma's eye. Rinse, wash, and repeat.

Upon completion of the temple, a Heart Container will appear as well as a Red Force Gem atop statue. Another part of the Fire Rail Map will be restored leading to the Tower of Spirits whose top portion has been restored.