From Zelda Dungeon Wiki
Jump to navigation Jump to search
Want an adless experience? Log in or Create an account.
Bonooru 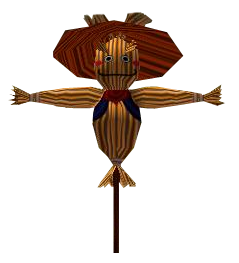 Bonooru is a character from Ocarina of Time. He is a scarecrow with an exceptional memory for music that lives at Lake Hylia with Pierre. When Link first meets him as a child, Bonooru boasts about his memory.[1] Link can take out his ocarina in front of Bonooru to make him ask Link to play a song.[2] If it is one of the existing ocarina songs in the game or only one note repeated, Bonooru will be unimpressed.[3] However, if Link creates an original song consisting of eight notes, then Bonooru promises to remember it.[4] After this, the song can be played at any time, referred to as the Scarecrow's Song.[5]

Seven years into the future, Bonooru is still at Lake Hylia and he claims to have remembered the song. Instead of proving it, though, he accuses Link of having forgotten and tells him to play it on the ocarina.[6] He is impressed when Link plays it correctly, and then he explains that Pierre will appear in certain areas to help Link when he plays the Scarecrow's Song.[7]