From Zelda Dungeon Wiki
Jump to navigation Jump to search
Want an adless experience? Log in or Create an account.
Jiro 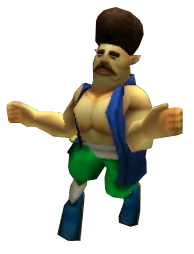 Jiro is one of the Carpenters that appear in Ocarina of Time.

When Link is a child, Jiro can be found within Kakariko Village where he prances around, running between the Well, and the staircase that leads up to the Death Mountain Trail. If you stop to talk to him, he mentions that the Carpenters are working all day long on the various construction projects throughout Kakariko Village. He complains that it will take a long time before anything is done and that the boss works them too hard.[1] At nighttime, Jiro can be found alongside Shiro and Sabooro in one of the houses in Kakariko Village, where he is starving and ready to eat dinner.[2]

When Link is an Adult, the Carpenters venture off to Gerudo Valley, where they are captured and held captive in the Gerudo's Fortress. Link finds Jiro locked in a jail cell, and Jiro compliments Link by stating that he has a lot of guts to get past all the guards.[3] When Jiro is saved by Link, he will comment about how he would much prefer to work as a Carpenter than join up with the Gerudo.[4]

The boss of the Carpenters was hired by Impa to turn Kakariko Village into a true city like that of Hyrule Castle Town.[5] As with most Ocarina of Time characters, Jiro has an identical counterpart working in Majora's Mask Clock Town.

After saving the Carpenters, they will appear back at a tent in Gerudo Valley where Jiro will compliment you on a job well done.[6] The Carpenters will together repair the bridge over Gerudo Valley.

The name Jiro or Jirou is a common Japanese name that means second son.